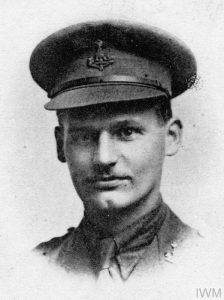 Commemorated: Pier and Face 3 A and 3 D. Memorial: Thiepval Memorial

Following their heroic attack and subsequent defence on the ‘Stuff Redoubt’ and ‘Hessian Trench’ at Thiepval Ridge the shattered remnants of 6th Battalion, the Yorkshire Regiment (on 29 September 1916 the battalion had suffered nearly 400 casualties) were relieved during the night of 30 September by troops from the 25th Division. Shortly afterwards the battle-weary unit had made their way to the rear, to a rest camp at Bouzincourt a village 2 miles to the east of Albert, where the valiant band of survivors (including Captain Archie White who would eventually receive the Victoria Cross for his actions at Hessian Trench) had been afforded some rest.

The battalion eventually moved to the village of Beaumetz where it had received ‘drips and drabs’ of reinforcements throughout October 1916, and by the end of the month the unit had received 19 officers and 427 ‘other ranks’ from the BEF’s base camp at Etaples. Amongst the officers who had joined the battalion had been a 26-year-old who had been seconded to the 6th from the Yorkshire Regiment’s 5th (Territorial) battalion: Second Lieutenant Henry Lawrence.

Born in Scarborough at ‘Somerset Cottage’, No 6 Somerset Terrace, on 22nd November 1890 (baptised at St Mary’s Parish Church on 17 December) Henry was the youngest son of Adeline (formally Turner) and nurseryman James Sidney Lawrence, a widower by 1917 who was the proprietor of ‘Crescent Nurseries’ in Manor Road, and a florists shop in Valley Bridge Parade. [1]

Motherless from the age of 5, Henry was a pupil of Gladstone Road Board School at the time his mother died at the age of 43 on Wednesday, 1 May 1895. At the age of 13 Henry, popularly known as Harry, had been fortunate enough to secure a place at the town’s Municipal School (the equivalent of today’s comprehensive school) that was situated in Westwood. Arriving there in 1903, Harry remained at the ‘Muni’ until 1907 when he left the school to travel to Canada to study at Toronto’s Wycliffe College with a view to being ordained and becoming a missionary. During the summer of 1913 Lawrence travelled to the wilds of the Western Canadian Province of Saskatchewan to assist with missionary work amongst the 300 inhabitants of the small, and curiously-named, town of ‘Eyebrow’ He remained at the settlement until the outbreak of war.

During September 1914 Harry Lawrence enlisted at Montreal as a private into the Universities Company of the Princess Patricia’s Canadian Light Infantry. The brainchild of wealthy Montreal businessman Hamilton Gault, the Patricias, named after Princess Patricia of Connaught, the Governor General of Canada’s daughter, was an extraordinary battalion of infantry which recruited mostly from the thousands of ex-British Army and Navy personnel who had settled in Canada in the years before the war.

By the time the battalion had completed its formation only 1 in 10 of the 1,100 recruits was born in Canada. 65 per cent of the recruits were English, 15 per cent Scottish, and 10 per cent were Irishmen. In addition 1,049 of the Patricias had served in the British Army or Royal Navy, and almost half of those had seen war service; between them they wore the ribbons of 721 campaign and service medals. By the time the formation was ready to leave Canadian shores it consisted of 2 sections of ex-Guardsmen, 2 of ex-Riflemen, and 2 of ex-public school boys.

With the minimum of training, Harry Lawrence and the remainder of the Patricias [even in official documents the unit was always referred to as ‘The Patricias’] with their commanding officer, Lieutenant Colonel Herbert Buller DSO sailed from Quebec on 27 September 1914 to become the first of Britain’s Empire forces to land in the UK. The Battalion was eventually been sent to the Winchester area during November where it was considered good enough to be incorporated into 83 Brigade of the then forming 27th Division, a formation composed of 12 Regular Army infantry battalions recently arrived in Britain following service in India, Hong Kong, and China. The Division had crossed to France shortly before Christmas 1914 and was eventually sent to the waterlogged St Eloi sector of Flanders during February 1915, where they had existed in appalling trench conditions.

The Patricias subsequently took part in the Second Battle of Ypres (22 April – 24 May 1915) where they had faced repeated frenzied German attacks and suffered terrible losses during the most critical day of the Battle of Frezenberg Ridge on 8 May, when all that stood between the Germans and the capture of the town of Ypres had been a thin line of battle-weary troops drawn from their own 27 Division and the 28th Division (between 23 April and 8 May, 83 Brigade lost 128 officers and 4,379 men). The British line at Ypres was held together by the superhuman efforts of the defenders and shortly after the fighting at Frezenberg, the battle of Second Ypres fizzled out.

Harry Lawrence eventually served with the Patricia’s for 9 months. During that time he was promoted to corporal and he had experienced one or two close calls. On one occasion whilst in the trenches at St Eloi a shell had exploded nearby killing and wounding 5 soldiers who were standing nearby. Lawrence received but a few scratches from the shattered glass of a periscope lens.

Lawrence was promoted ‘in the field’ to Second Lieutenant during early 1916 and shortly afterwards asked for, and received, a transfer to the 5th Battalion, The Yorkshire Regiment, which contained many men from Scarborough, including Lawrence’s great friend, 37-year-old solicitor’s son, William Andrew Turnbull, who was serving as a Second Lieutenant with the battalion. The two officers served together until 17 July 1916 when Turnbull was killed in action in the Locre Sector of Flanders.

The 5th Battalion was eventually sent to the Somme Sector where they took part in the Battle of Flers/Courcelette (15-22 September 1916) and the capture of the village of Martinpuich on 16 September. Shortly after these engagements Harry took a short leave in Scarborough before returning to France during October where he eventually joined the 6th Battalion, The Yorkshire Regiment.

Lawrence joined the 6th Yorkshires on the Somme near to the village of Beaucourt where, during the night of Wednesday, 17 January 1917, the young officer went out into no mans land with 2 others on patrol. One of this party shortly arrived back in the British lines. Badly wounded, the officer reported that Lawrence and his companion had also been injured. Search parties were duly sent into no man’s land to look for the 2 officers but failed to find the injured men. However, a few days later the remains of Harry Lawrence and his companion were located in a water-filled shell hole where their remains had been buried. Although marked on a trench map, by the end of the war Lawrence’s burial site had been lost and his remains have never been recovered from the battlefield.

Harry’s name was eventually added to the Pier and Face 3A and 3D of the Thiepval Memorial to the Missing of the Somme. In Scarborough the missing lieutenant’s name was included on a now (2003) fallen down and broken gravestone in the town’s Dean Road Cemetery (Section A, Row 8, Grave 2), which also bears the names of his Norfolk-born mother Adeline, and Scarborough-born father James Sidney Lawrence, who later died at his home at 71 Manor Road on 22 October 1922 at the age of 78 years.

Henry Lawrence was also commemorated in his old school in Gladstone Road on the ‘Roll of Honour’ that bears the names of 71 ‘old boys’ and 2 women who had lost their lives during the war. The memorial can be found in the hall of the present day Junior School. He was also commemorated on the ‘Roll of Honour’ at the Municipal School, which carries the names of 63 former pupils. Their memorial is now (2003) located in Graham Comprehensive School, in Woodlands Drive. and bears the inscription:

Harry was also a member of the congregation of the now defunct Holy Trinity Church in Scarborough’s Trinity Road, thus Harry Lawrence’s name (and that of his dear friend William Andrew Turnbull) was included on the church ‘Roll of Honour’ which was situated on the south interior wall and window of the church. (At the time of writing, 2003, the church is in the process of being converted into a unit of flats, and the whereabouts of the ‘Roll of Honour’ is not known.) The Inscription on this Memorial had read:

‘To the glory of God and in undying memory of the men from this church and parish who gave their lives in the Great War 1914—1919. This window and tablet have been placed here by their friends and fellow parishioners’…

Henry Lawrence’s is also commemorated in Canada on page 578 of the First World War Book of Remembrance, which is located in a memorial chamber in The Peace Tower, on Ottawa’s Parliament Hill, which is maintained by Veteran Affairs Canada.

[1] At the time of the 1891 Census of the population of Scarborough, the Lawrence family resided at ‘Somerset Cottage’ and consisted of: James, aged 37, born at Scarborough; Adeline, aged 39, born Pulham, Norfolk; Arthur, aged 15, Ernest, aged 14, Frank, aged 11, and Agnes, aged 7, (all born at Doncaster); Flora, aged 3, and Henry, aged 4 months, both of whom had been born at Scarborough. Arthur Lawrence, a florist in the family business died at the age of 40 on 26 February 1916. Following a ‘heated argument’ with his father, Arthur had returned to his home at 138 Moorland Road where he committed suicide by hanging. His body was found by his wife, Minnie Theresa Lawrence. Arthur was subsequently buried in Scarborough’s Manor Road Cemetery (Section O. Row 2. Grave O.) with first wife Jessie Lawrence (Arthur had married Jessie Plows at St Mary’s on 6 May 1899 and she had died on 25 April 1910 at the age of 36). Minnie Theresa Lawrence died on 10 April 1933 at the age of 63. This lady’s grave is located on the border of Section W, Grave 75. Henry’s eldest brother Ernest Lawrence died in Scarborough at the age of 93 on 3 August 1970, and he was buried in Manor Road Cemetery with his wife Elizabeth (formerly Alden) who died on 10 January 1958, at the age of 80.