You are here: Home / Archives for The Fallen / S

There is a wonderful window in St Laurence’s Church, Scalby, dedicated to Charles and his brother, John, who was killed at Gallipoli. Photos are below. You can read more about Charles Sillery and John Sillery at Scalby War Memorial website.

Click on an image to view a slide show at full size.

Back in the comparative safety of Fremicourt the surviving Midland Pioneers paraded for the customary post battle roll call to ascertain the number of the battalion’s casualties. This revealed the unit had lost 3 officers killed, and a further 7 were wounded, whilst the ‘other ranks’ had suffered 30 men killed in action and a further 80 were missing. In addition, 160 ‘other ranks’ were wounded during 21 March 1918. Many of these men were evacuated to various hospitals behind the front in places such as Abbeville, where another Scarborough-born Midland Pioneer succumbed to his injuries by 28 March 1918: 23524 Company Serjeant Major Percival Stabler.

The holder of the Distinguished Conduct Medal (‘gazetted’ in the London Gazette of 22 October 1917), ‘Percy’ was born in Scarborough during 1883, and was the son of Louisa Jane (formerly Shaw) and Joseph Stabler, a joiner and carpenter by trade who lived for many years in Scarborough at 39 Castle Road. For a number of years prior to the war Percy worked in the grocery trade in Scarborough. However, Percy was married in Lincolnshire in the Church of St Peter’s and St Paul’s in the village of Gosburton, on 26 December 1907 to Florence Harriet Wheat and, by the time of the 1911 Census, he was living in the north-west Leicestershire market town of Coalville, at ‘Storer House’, Highfields (the couple’s only son, Ernest Arthur Edward Stabler, was born on 14 June 1911 at Ashby de la Zouche).

Employed as a ‘grocer’s manager’ before the war, Percy became a member of the ‘Midland Pioneers’ from the battalion’s formation during October 1915, and he enlisted into the unit as a Private for the duration of the war at Leicester on 29 December 1915. However, having already served for a number of years in the pre-war 2nd Battalion, the East Yorkshire Regiment, Percy was soon promoted to the rank of Acting Corporal on 1 January 1916 and then to full Corporal on 15 February. An Acting Serjeant by mid March 1916, Percy arrived in France with this rank on the 18th of the month. Further promotion followed and on 27 March 1916 he was promoted to full Serjeant.

The Midland Pioneers were attached to 6th Division as the formation’s Pioneer unit and joined the Division ‘on the Somme’ in time to take part in the Battle of Flers/Courcelette that took place between the 15 – 22 September 1916. Here Percy displayed courage under fire that eventually earned him the Distinguished Conduct Medal. Promoted to Company Serjeant Major by this time, towards the end of 1916 Percy Stabler was admitted into the 20th General Hospital at Camiers suffering from ‘Myalgia’ on 22 December 1916; he was then evacuated to ‘Blighty’ for treatment and was at home by Christmas that year. (The majority of the information regarding Percy Stabler’s military career has been gleaned from his very tattered Service Record that is available online courtesy of Ancestry.com).

Out of action until May 1917, Percy returned to France on 25 May and rejoined the ranks of the Midland Pioneers, which at this stage of the war were stationed in the Arras Sector of Northern France.

The news of Percy Stabler’s death, at the age of 35, was included in a casualty list that had appeared in ‘The Scarborough Mercury’ of Friday, 12 April 1918.

‘Company Sergeant Major Percy Stabler, D.C.M., Midland Pioneers has died in a French hospital from gunshot wounds in the chest. Sergeant Major Stabler volunteered for service early in the war, and joined the Midland Pioneers. He won the D.C.M. by organising a dozen men to unload an ammunition wagon which had become derailed, and was being heavily shelled by the enemy. Though under fire all the time they succeeded in saving many thousands of rounds of ammunition. Before the war Sergeant Major was manager of a business in Coalville where his wife and child reside. He was born in Scarborough, being the son of the late Mr Joseph Stabler, joiner and cabinetmaker, who resided in Castle Road, and a nephew of Mrs. Matthew Procter. He went to Leicester from Scarborough several years ago … ’

Following his death at Abbeville’s No 5 Stationary Hospital, the remains of Percy Stabler were taken to the town’s Communal Cemetery Extension which still is located on the side of the road leading to Drucat, where he was interred in the Cemetery’s Section I, Row J, Grave 28.

Despite being a native of Scarborough, for some unknown reason Percy Stabler’s name is not included on the town’s Oliver’s Mount War Memorial. The Memorial does, however, contain the name of; 240975 Private George Frederick Stabler. 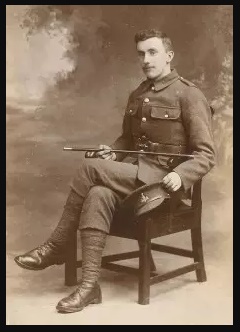 For some reason, Ted’s name was not recorded on Scarborough’s Oliver’s Mount War Memorial until 2010, though his service and sacrifice had been noted elsewhere.

According to research carried out by Paul Allen, Ted Snowden was born at 18 Sandringham Street in Scarborough on 16 December 1896, the only son of hay and straw dealer Edwin Snowden and wife Hannah, formerly Hepworth.

He was baptised in the town’s Jubilee Methodist Chapel on 3 February 1897 and his name had been included on a “roll of honour” that had been displayed in the foyer of that building until its demise in 1970 when it was demolished to make way for a building that today is Scarborough’s Job Centre.

The whereabouts of that memorial to the men of the church who lost their lives during the Great War is not known.

An apprentice electrician and living in Seamer when war broke out, Ted enlisted into the army at Scarborough soon after the German naval bombardment of the town in December 1914. Joining the Yorkshire Regiment, he initially served with the 10th Battalion and received his “baptism of fire” during the Battle of Loos in September 1915. Fortunate not to be among more than 300 casualties suffered by the Battalion at Loos, Ted went on to serve with this unit throughout the Somme offensive of 1916 and the Third Battle of Ypres and Arras Offensive of 1917.

By the end of 1917, the battle-worn 10th Battalion was stationed in France at Moislains but, at the start of February the following year, the unit was disbanded in an army reorganisation. Its officers and men were posted to other units of the Yorkshire Regiment, with Ted joining the 5th Battalion. After two years of service on the Western Front, he returned to Seamer on 14 March 1918 to enjoy some leave, but was recalled back to France soon after, probably due to the beginning of the German Spring Offensives. A postcard to his family back home, telling them that he had arrived safely, was the last they would hear from him. Relatives were told Ted had been killed in action on 25 May 1918 and although that is the date recorded by the Commonwealth War Graves Commission, Mr Allen says the evidence suggests he was probably killed before this date, perhaps soon after rejoining the regiment on the Somme, not long after the start of the German Spring Offensive.

The remains of Ted Snowden can be found in Section 1, Row I, Grave 18 in Hangard Communal Cemetery, which is around five kilometres south of Viller-Bretonneux.

Although the Jubilee Methodist Chapel roll of honour has long since gone, Ted’s name has been included on a brass plate roll of honour that to this day can be found in Seamer’s St Martin’s Church.

Mr Allen said: “Writing [my] book has been an incredibly humbling experience and it’s a privilege to be able to share these many stories of courage and bravery. I also feel incredibly proud that my research has led to the inclusion of Lance Corporal Snowden’s name on Scarborough’s main war memorial.”

Ted Snowden’s nephew, John Snowden, a retired electrician from Mansfield said: “I am very pleased to have my uncle’s name included on the Scarborough war memorial. Ted was my dad’s hero and was never forgotten within the family. Aged just 21 when he died, his place on the war memorial is justly deserved and I am very grateful to Mr Allen for his help in ensuring that my uncle’s name will be seen by generations to come.”

John Anderson from the Scarborough branch of the Royal British Legion said: “It is fitting that Lance Corporal Snowden’s name could be added to the Oliver’s Mount monument in time for Remembrance Sunday. He will be in our thoughts and prayers, along with the many hundreds of servicemen and women from Scarborough who have served their country proud.”